More than a year ago, Alexej invited me to a bachata competition called Bachata Stars. A competition which is open for everyone and the winner is going to the world championship. At that time, I was dancing bachata only for a few months, so you can guess what my thoughts were: what would I be doing there? Instead of Bachata Stars, I participated months before in some Jack & Jill competition. It was fun, and I ended up in fourth place.

Jack & Jill is about individuals, not about couples, which means that you don’t dance with the partner you want. Some people don’t like that as one of my friends, Stela. One day at the salsa party, she told me about some competition for couples at the first Bachata Magic festival (it was less than a week before the competition when she told me). We enjoyed dancing bachata together, and I had a good mood that day, so I replied positively. She was kind of surprised and asked me if I mean it. I said, sure.

You should see my face when I realized what I agreed to! But I couldn’t back off. Well, I could, but I didn’t want to be seen weak after such a strong positive response. Anyway—in the Czech Republic is not so many good dancers. There was a pretty good chance not to be the last one, which was my goal.

You should see my face when I came to that competition, and I found out that I was the only one from the Czech Republic. And that other couples were dancing together for years. And that we even didn’t have time to deal with outfits which were horrible compared to others. And that we had to dance alone on the stage with lights and cameras.

I wanted to run away!

Instead of running, I was drinking. It was the only way I could go on the stage after I saw how others dance.

I asked our teacher, Pavel, what we were doing there. He replied simply: drinking. I said, I know, and asked again. He said drinking because he would as well if he were us because they are better than him. Of course, it was just a joke, exaggeration. Anyway, so supportive!

Well. We did it. It was horrible. But no one said that. Everyone said it was brave and that it wasn’t worse dance that night. It was our goal, and I was happy. I said I tried that, and I will not do it again…

It started a week before the celebration party in Brno. Another friend told me I should go with her to bachata party there. I said no. That there will be competition. I said I am not interested. That she wants to do it with me. I still wanted to stay at home, but she used women’s magic: kind words how amazing dancer for her I am. She got me. Men are so simple!

Unfortunately, I won. Probably it looked very funny because I couldn’t believe it and wanted to leave the stage as soon as possible. Anyway, they told me I also won an entrance to Bachata Stars. I smiled and said no. At that moment, a friend from Bratislava, Verča, came to me and said she is going there. Just for fun, I said, then I will go as well and defeat her! She simply smiled and said that maybe we would be there together…

Her dance partner backed off, and she had already been registered. She wanted to go with me instead. She also used dark magic, and she had the same goal as I had: enjoy dancing and do it differently. I was in for the second time.

We also had less than a week to prepare, but at least this year, we prepared adequately. We practiced every day to know each other (you know, we didn’t dance much before, and if we did, it was salsa), prepare start and finish, and so on. It was a hard week, but I enjoyed it very much. I learned much. It was a kind of private boot-camp.

Alexej asked us what country we represent. Verča said Czechoslovakia. I said no, we would represent the First Czechoslovak Republic (or simply První republika in Czech). Thanks to this joke, we tried to find an outfit similar to the Great Gatsby style.

Our dance was amazing. It wasn’t enough to get to the second round, but I won something personal. I did it better than any practice the whole week before. And also I finally didn’t forget about our one funny move which everyone liked! I saw the video, and I’m not ashamed about it! 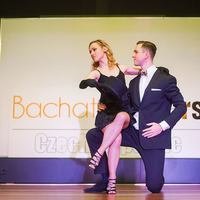 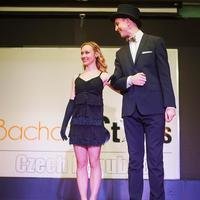 But that’s it. I will not do it again…

…which statistically means expect me there. I prefer salsa, but I am at every bachata competition, Alexej noted once. :-))

Well, I asked the judges for their opinion. I had a few specific questions, but I didn’t ask them. I wanted to know what they say generally. I was expecting the result I got, but anyway, I was kind of disappointed. All feedback was about we are not doing it as others. The dance wasn’t open enough for the audience. It was too far in the back of the stage. From start to end, it was improvisation. Because of our height difference, we should use other moves. And so on.

You know, there was one couple, for example, and they had for every song prepared choreography. In those choreos, they had also smile, which was false. Like everything in that dance was artificial. Maybe they are excellent (they are, friends told me they danced with them and they are amazing) but it’s horrible to look at it. It’s not fun. It’s boring.

I’m sad that this boring stuff is what I need to do to be able to win even a small price.

I don’t care about winning. I just want to enjoy dance and bring the fun. So maybe you will see me again, and I will again not win anything, but I will try my best to do it nicely and mostly, differently. :-)