I wrote about the need for new types of salsa events and then I said let’s dance during the day without waiting!

I did it. I was dancing only during the day at Šibenik, Berlin marathon and Heidelberg marathon. It works!

For me, it’s amazing. A lot is much better. No sleep deprivation. No salsa-lag, as I call it. When I eat breakfast, it’s really breakfast. I’m not tired soo much and thanks to that I can be more present during the dance. Perfect!

But it also has some disadvantages.

First, I can do that only at festivals with an afternoon social, or at marathons. Obviously. :-) This is not a problem. We all are different, and every one of us likes something else. That’s perfectly all right. But I believe there is still a space for more concepts.

Second, it can work only when an organization (especially) of the marathon is good. I’m talking about food. :-) There can be several issues: no food, bad food, or food at the wrong time. Just have one problem and afternoon social is killed (actually, the night party as well). People need to eat, and if there is not enough care, the dance floor will be empty very quickly.

For example, in Berlin was no dinner and during the afternoon you could have only pancake or cake (tasty, but sugars only are not a good strategy to keep energy for the whole day). Of course, people had to walk away for proper dinner and empty the dance floor for a very long time (note: only on Saturday, it was fixed on Sunday; but the concert was amazing!). In Heidelberg was dinner very delicious, but too soon because of an absence of snack, people left the dance floor already at 7 pm to nap, even though there was a very cozy place to chill.

We can say many bad things about Prague’s salsa marathon (like not taking into account couples or groups of people for invitations, many personal issues with locals so you will not meet them there and such), but after many years, food is very well-tuned. There is plenty of good food all the time and dinner is later. Because of that, the afternoon usually ends after 10 pm. Big difference.

From a food point of view, Hamburg salsa marathon is very similar and looks very promising!

Anyway, back to the afternoon dancing. I’ve been asked many times when I will come back after dinner (after a nap). It’s a little bit funny to see shocked faces I really mean I will not come back.

The food schedule is critical, but in the end, it’s about us. From my experience, people are amazed. Sometimes, their faces look like I’m trying to do something totally impossible. Sometimes I meet people who even never imagined the possibility not to dance in the night. It seems like being messed up after the salsa weekend is pretty standard, like drinking water.

If you don’t like it, you don’t have to do it. You can dance during the day and have many dances as well. Let’s do the math here: if dancing starts at noon and you dance until midnight, it’s 12 hours. If you leave at eight to nap and come back at two to finish at six, it’s also 12 hours.

In the beginning, I was afraid, and I always took more clothes with me to be able to come at night as well. But I still have so many dances during days that I’m OK. I don’t have the feeling I’m missing something, because I don’t. Actually, I still have a lot of dances, and I’m fresh during and after the weekend!

I asked people why they dance at night. I got several responses, such as:

Music is very hard to judge. I can like some DJs very much, but always there will be a situation when I will not like his or her set. It doesn’t have to be even different; it can even be the same set, which I liked a lot some other time! It depends on my mood. When I want something slow, and I got some crazy fast songs, I’m going to be disappointed and vice versa. My friend noted there are so many great songs he doesn’t believe that music is better at night. I agree with that.

About dressing up, that’s true. At the Heidelberg marathon, I saw many people coming to the afternoon in clothes more suited for sports activity than for dancing events. My girlfriend said men in the West Coast Swing community are dressed very horribly, and she is scared if this is going to be the case at salsa afternoons as well. I hope not.

Another friend responded dressing up is an argument against the night party. Well, I can understand. I heard many times that in Paris, if the lady is not dressed very nicely, she will not have many dances. Not sure how true is that anyway, both extremes are not very good. We don’t have to wear a full gown like to the opera. But also we shouldn’t wear sportswear.

I can understand if you are a night owl or you like to be out during sunrise. And then I’m surprised you are still reading this. :-) In that case, you care about others; maybe you have a friend who likes more afternoons as I do. If you want to help, don’t leave the dance floor too soon! Be there at least till 10 pm for your friends. :-)

Because thanks to that can also be solved the next point, that in the evening, after dinner, almost everyone leaves for a nap, and there are not many dancers to dance with. I’m always sad to see that, especially already at 7 pm.

The mood is the most complicated one. I hear that often, but nobody can explain it better than just the mood. I cannot, either. At Šibenik, I went once to the night party at the beginning only for three (probably five) dances with my friend. She took workshops and wasn’t much at the hot spot, and we like to dance together. Even when there were only a few individuals, and we were the only couple dancing, the mood was different. I get it.

Definitely, afternoon dancing is not for everybody. Twenty percent of the population are evening people, the same is valid for morning people, and 60 percent is the remainder land somewhere in between. Somewhere in between means getting up around 8 in the morning and going to bed around midnight. The percentage can vary depending on the study, but this is what we can generally say.

So, there is a vast amount of people who would prefer a dance event aimed to be during the day. I’m one of them, and I want a dance event for us. If you wish to as well, do it, it can be done, talk about it, mostly to organizers you know, and maybe one day we will have an event like that. :-)

But I feel it cannot be done right away. We are not ready for that yet. People need to get used to this idea, to know it’s possible and pretty normal. I give it a year or two. Sometime in 2020 or 2021, there will be a salsa event without dancing after one in the morning. And I will be there! :-)

But… anyway, I will come to any marathon if I will be able to come. Marathon is the place for a social dancer. It would be great to see at least a better food schedule to achieve better afternoon social. And yes, bring more people! When there are more dancers from both sides, the dance floor will be full of people all the time. 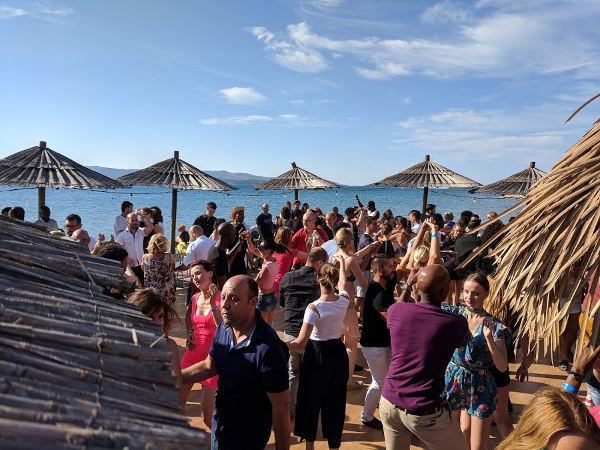