Kingdoms cannot simply declare war. King needs warriors who would fight for him first. Peasants were those warriors at the beginning. Ordinary people lived a normal life during peace, and once the king needed warriors, they created their armor and weapons and fought for their king. They did it for honor and fame (and during crusades Christians offered indulgence).

Over time, kings awarded knighthoods. Knights are the nobles. King collects money from peasants, some peasants go into war for their king and earn titles and money. Peasants, now noble knights, used the money to build castles where they could live during peace and protect themselves during wars.

Castles were an exhibition of nobleness and power, and also protection for people living around it. Knights had its subjects filling knights’ treasury, and knights served kings. Kings were head of a broader area and served God. Only the pope could crown kings (ex-communication by Church was the worse punishment for the king).

Knights were bound to a king, but naturally, they led private battles for the power and the crown. Title, arm, sword, and horse were not enough to be a knight. Each knight had to show off at a tournament. A tournament was with real weapons, and you wouldn’t see the difference between a battle at tournaments (with 20 on 20 knights, or 50 or even 100!) and a real battle.

Church banned tournaments, but no one cared. Tournament meant social prestige and recognition, something like Formula One. With the rise of knighthoods and tournaments, the coat of arms was introduced. Each family had its own; similarly, like each Formula team has one to be recognized. Knights painted the coat of arms on their armor.

People loved knights because they were protecting them. Sometimes, some knights even fought alongside peasants against exploitative kings. Knights got the best reputation once they stopped battles between each other and united themselves against Muslims in crusades.

One of the most well-known knight orders were Templars. They were everywhere and powerful enough to force even the king to leave a throne for his brother, or thinking about creating their state similarly to State of the Teutonic Order in Prussia. But Templars were well-known because of something else: they were the first to provide a banking system close to what we know today. You could give money at any Templar location and pick it up at any other Templar location. Philip the Fair, King of France, was afraid of them and let kill them all.

Philip also wanted to have a pope close to have a better control over him. Pope left Rome to Avignon as a new Papal home. French politics manipulated the pope, and the Church wanted to have pope back in Rome. To make it happen, Church elected Italian pope after the French one. He was a disaster, and they quickly elected a replacement who left to Avignon again. Italian pope didn’t accept the new election, so there were two popes. Church made another election in Pisa to solve the problem, but it was even worse: the third pope came into the game. Each kingdom preferred a different pope. Problem took a few decades until all three popes died or resigned.

After crusades, European kingdoms focused back more on local battles. One problem was started by William the Conqueror, King of Normandy. He conquered England and also became King of England. For some time, kings of England ruled over some parts of France. Both kingdoms had frictions for the whole time between each other, but not a very serious ones. Then too young kings inherited thrones to bear the burden of governance, to put it simply, and unleashed the Hundred Years’ War.

The war was not continuous. Black Death was one of the reasons why the fight was interrupted. It was a plague coming from Asia and killing half of the European population and up to 375 million people in total. It took 200 years for Europe’s population to recover to its previous level.

Holy Roman Empire went slowly into oblivion, and it was hard to achieve the emperor title of the Holy Roman Empire because of Papal Schism. No one expected anyone to get the emperor’s title during the war, after the plague and with pope under control of French kings. Charles IV surprised everyone.

Charles was raised in France, and he was intelligent, speaking many languages, and had excellent connections around Europe. He used all that to get title and rule peacefully through diplomatic channels. Bohemia was not hit hard by Black Death, it was spared of wars, and full of silver with respected currency Prague groschen. Charles picked Prague in Bohemia as a new center of his Empire (note that Holy Roman Empire in that time included only Italy, Switzerland, Austria, Czech Republic, Germany, Benelux, or Denmark) and gave to Bohemia independent position within the Empire.

There were many more clashes for thrones. Connecting all details together would make a heavy book. But those details are not that important; important are the improvements over time. Battles were more and more sophisticated—for example, Gunpowder was brought from Asia to Europe during the Hundred Years’ War. Gunpowder was used infrequently at the beginning of the war, but by the end of the war, it was common, including powerful, movable cannons.

There was no place for classical knights with a sword on the horse anymore. Knights were only peace disturbance. Emperor Maximilian I was the last knight and the first cannoneer putting knights aside militarily and also politically. Onwards, knights were only entertainment in tournaments with more shiny and expensive suits every year and remain like nostalgia till today.

Next post will cover how people doubted God and turned to forgotten science from ancient Greece again. 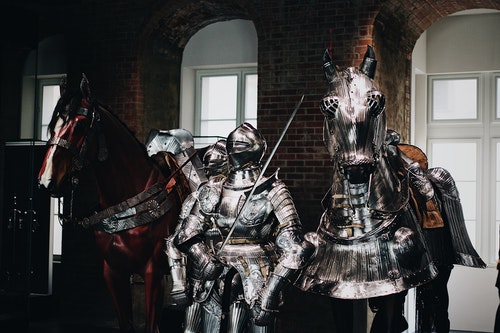 Monotheism is the Worst Story, January 20, 2021 in humanity

Stories and Perspectives, January 18, 2021 in humanity

Our Fake Stories are Flawed, January 6, 2021 in humanity