It all started with a Big Bang, which spread the energy to all corners of the universe. From that, galaxies and stars were made in which chemical reactions created matter. Bigger the star, heavier the matter. When a star collapses, it spreads that matter around, which is used to form planets. Some planets can get very diverse founding from many divert stars, making them rich. One such rich world is our planet Earth. Earth got everything needed to start life.

Water, carbon dioxide, and light energy are synthesized into carbohydrate molecules, and as a waste product, oxygen is released. This process is called photosynthesis—the essential ingredient of life on Earth. Vegetation thrives, and once there is enough sugar in plants and oxygen in our atmosphere, animals rise. Both vegetation or animals are just chemical reactions as everything in the universe. Animals and humans are just more complex ones.

Today, we speak about ourselves (I mean humanity) as one awesome unique creature distinctive from everything else. But it’s not true. We are also animals programmed by nature, by the universe. And actually, we are not even the only one specie. We, Homo Sapiens, are the single living branch of Homo genus, but we are not alone, and our history is profound.

The first Homo genus appeared around four mya (million years ago) in Africa. At that time, African mountains were risen by tectonic movement, and those mountains blocked clouds. The absence of water changed some areas from dense forests to sparse trees. The fruit was hard to get. Ramidus was still living in trees and was close to apes, but could walk already. He was a terrible climber and also a terrible runner, but the ability to live both in trees and also on the ground, to go to the next tree, was an advantage.

Ramidus also adopted a family concept. Usually, animals need to fight for their females, but Ramidus switched to monogamy to save energy. The next evolution step was Homo habilis. Habilis was weak and survived because he lived as hyenas (finding and eating carrion). Bone centers provide more nutrients which habilis accessed by… stones. Stone tools were invented by accident. That was evolutionary and made a big leap forward.

The next evolution step was Homo erectus. Erectus around 1.8 mya was not a fast runner, definitely not a good sprinter. Hairy animals will get quickly sweaty and warm, causing heatstroke and making them unable to run for a long time. Erectus didn’t have much hair anymore and thus was at least an excellent long-distance runner to tire the victim. Erectus was also the first human to get out of Africa; to Asia and Europe.

Climate was substantially fluctuating between 900 and 500 kya (thousand years ago). Nature can modify genes to cope with new environments, but it cannot happen quickly. Homo genus got genes for cultural life. Culture can adapt much faster. We can use parallel here: a group of carbon atoms can make graphite or diamond. Both graphite and diamond have properties such as softness, darkness, and so on. Those properties don’t belong to the atom itself but the collection of atoms. We can say that cultural life is a collection of individuals.

Family and monogamy and later stone tools are the first sights of cultural life advantage in practice. Another one was fire for cooking. Heating meat and veggies provide more nutritious food and also more options. Cooking helped us to survive climate change more easily, and set the new path. Without it, civilizations would not start. The first evidence of cooking goes back to 500 kya, but I believe humans were able to cook even before. Change on cultural level set the direction for genes changes. Cooked food was easier to eat, and so we could get rid of strong teeth and big stomachs for raw meat.

Because there was no need to process raw meat anymore, the energy could be transferred to the brain instead. This change happened slowly. Meanwhile, Home erectus evolved into Homo neanderthalensis in Europe and into Homo sapiens in Africa. Those two could speak for the first time around 300 kya.

The last ice age started around 190 kya and made drastic changes. Asia was with no severe change, Europe was much colder (Neanderthals adapted), and Africa was one vast desert. Sapiens hid from the desert in South Africa near the coast and ate shellfish, which helped them to survive (note that humans were not living near the coast and did not eat seafood until this point). The population of sapiens was tiny but survived. We are proof of it. Our DNA is not very varied, hinting the population had to be small at some point.

But what happened to Neanderthals? Around 45 kya, sapiens migrated to Asia and Europe and met Neanderthals. Maybe if sapiens would not go there, we could still have more of Neanderthals than just two percent in our DNA (yes, Neanderthals and sapiens mated). The problem wasn’t a war or so. Not even climate change (the end of the ice age) alone. It was the combination of events: not enough people making less variability leading to illnesses, climate change, new people, and new diseases brought from Africa… Neanderthals died out around 39 kya.

There was also something else: sapiens acquired cognitive abilities around 70 kya. I like the name Cognitive Revolution for this period from book Sapiens by Yuval Noah Harari. At that time, humans could enjoy the real advantage over other animals: cumulative learning. Many animals can learn and use simple tools, but humans could pass knowledge from generation to generation and invent more and more sophisticated tools with small steps.

Cumulative learning is the only difference that is rare to see anywhere else in the animal world, and if yes, in limited capabilities. Still, we have a lot in common. Nicholas A. Christakis, in his book Blueprint wrote: it’s like comparing two hills, one 300 and other 900 meters high, but ignoring both are on mountain 10000 meters high. Humans and animals are both 10000 meters high.

Next time, I will continue about how humans used new cognitive abilities. 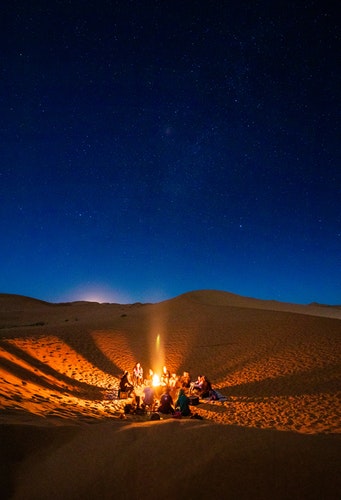