Humans acquired cognitive abilities around 70 kya (thousand years ago), which gave them one specific advantage over other animals: cumulative learning. It opened the door to invent not just more tools but also more complex tools. Sophisticated tools, however, do not come automatically. All tools need to be remembered and passed from generation to generation, or they are going to be forgotten. Help in the form of writing was yet to be invented, and even written notes cannot help all the time—for example, after the fall of the Roman empire, people forgot how to make concrete for 700 years!

Bigger communities have the advantage of remembering more. Basically, a bigger community has more memory available; more brains. Sapiens formed bigger groups and could develop advanced tools. Although Neanderthals had a bigger brain, they couldn’t catch up sapiens for two reasons. First, their brain was bigger at the back—the part responsible for vision to see better in a darker environment (Northern areas are darker)—and second, Neanderthals preferred to live in family circles instead of big communities. But they were skilled enough to adapt up to some level to new tools brought by sapiens.

Besides bigger communities, sapiens needed one more ingredient: cooperation. First, humans lived in smaller groups, which we can call families. Everyone knew everyone, and trust (and thus cooperation) was not an issue. But with a big community, you cannot know all members. It is profitable to trust and cooperate automatically with strangers because not cooperating could start gossips in the community. Then the group could exclude non-cooperating individuals (and it’s hard to survive alone).

We have cooperation encoded in our genes. It was proved by a test with infants who is not corrupt by society yet. However, our genes can change. Who knows how the modern anonymous world will affect the genes of future generations.

Anyway, non-cooperation is not anything new. It’s natural. There can be three types of people: cooperating, free riders (those who do nothing and just enjoy benefits of the community), and loners (those who do things only for themselves). Community with more cooperating members can have more free riders. Free riders cannot hide in a group of two but can hide in a group of 100 members. As time passes, more and more cooperating people switch to free-riders until, at some point, the rest of the cooperating people gave up and switch to loners instead. Free riders cannot enjoy benefits anymore and will turn to loners as well. After some time, the community will be full of loners until someone notices that it would be profitable for everyone to cooperate again.

I cannot generalize to the entire world now, but in my country, I can feel we had a lot of free riders in the recent past, and we have a lot of loners right now. Many people don’t like the idea of paying taxes, for example. It will need some time before people in this country realize it’s better to cooperate again. And then it will start all over again for sure.

We must accept it; no social hierarchy can change it. Social status can be maintained by power or prestige. Animals in constant environment prefer the former, hierarchy maintained by power, which is mostly seen in nature. Humans evolved during unstable environmental conditions, where the ability to adapt is crucial for survival. That’s why we naturally follow people who can give us information or help us. We trust such people and copy their behavior because we need to learn from others in order to survive.

Humans are not good or bad. Humans have basic needs like other animals: the need for food, sleep, shelter, and sex. When the basic need is covered, we aim for the next levels such us safety (both emotional and physical); then social belonging (friendship and love); then recognition (status and respect); and finally to find full potential (find our meaning in this world by giving to some higher cause outside ourselves). If someone is missing some basic needs, we cannot blame them for not using the full potential and not helping build a better society.

Homo sapiens slowly invented tools in bigger communities to cover basic needs. They were hungry and created a whistle or atlatl spear to make hunting easier. They developed shaped stone tools (ax) to build shelters (where they could sleep and mate) and boats to find new land. They invented needles from bones and used fur from animals to make clothes to survive colder conditions. They mixed herbs to heal wounds. Everything was done in cooperation to survive and cover basic needs.

Other animals adapted to sapiens and their inventions. Animals learned that we can kill them from a long distance or that we can exhaust them by long-distance pursue and so on. But not all animals could be ready for us. Humans left the cradle of humanity (Africa) 200 kya and slowly visited all corners of the world. Australia was untouched by humans until 45 kya. Australia had megafauna; many huge animals. I visited Australia last year, and when I saw a wombat for the first time, it became my favorite animal. I`m not sure if that would be true if I would visit Australia 45 kya, because wombats were much bigger. Also, kangaroos were as tall as 6 meters, even more. Those animals had no experience with humans and were surprised how easily such small humans could hunt them.

The same thing happened in America after the last ice age around 10 kya (but first humans were in America already 120 kya), on Wrangle Island with last mammoths around 4 kya or in New Zealand 800 years ago. Now all megafauna is gone. We call it the first wave of extinction.

Are humans bad? Well, what about tree spreading roots around and consuming all available energy so other plants cannot prosper. Is that tree terrible? It all depends only on a definition. If civilization is good when it can survive and be happy, then we are okay.

The problem is, we created artificial systems making us less happy. About the first one, farming, next time. 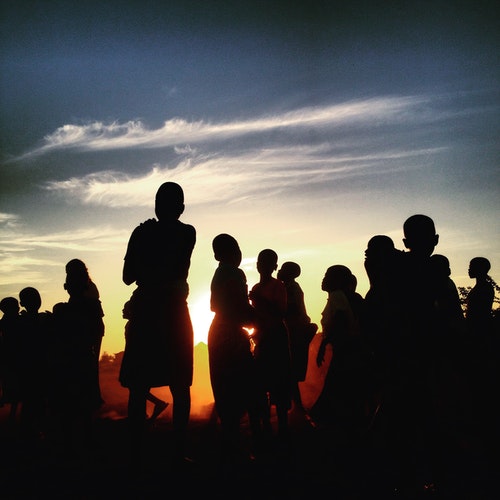