Hunter-gatherers were living in small tribes always on the move. They hardly met some other humans and obtained food by foraging (collecting wild plants and pursuing wild animals). Foraging was good for humans as it provided diversity and all necessary nutrients. Foragers lived long lives (up to 60), and only child mortality was an issue. Viruses were not common. Hunter-gatherers were connected to nature much more than anyone today (including spiritual individuals) and had more skills. They had much fewer duties, and they enjoyed more of their free time. This style of living, however, can feed only a limited number of individuals.

Natural selection shaped our DNA in a direction to promote friendship and cooperation—the foundation for morality, mutual aid, and social learning. Based on this, humans developed tools and passed information across time and space. Humans felt they are superior to animals. It isn’t easy to prove but makes a kind of sense. Around 40 kya (thousand years ago), Homo sapiens was the only one specie of Homo genus. It’s hard to see equality with other animals in such a situation. At least some proof can be found in early texts, for example, in Epic of Gilgamesh from 2000 BCE. Our attitude towards animals stayed the same till Scientific Revolution in the 16th century, and even today, some of us keep a similar attitude.

Separation of humans from animals caused the second wave of extinction. People settled down and domesticated grass and animals to feed more humans. First settlements were in places with vast fish resources. Later humans learned how to domesticate grain (wheat, barley, rice, corn, …) and mammals (goats, sheep, pigs, cattle, …). Humans created by selective breeding plants and animals, which would not evolve naturally. Agriculture Revolution happened independently around the world, starting around ten kya.

It took a great deal of work. Farmers had to work much more than foragers and, as a result, got a less diverse menu. On top of that, cattle breeding caused a spread of viruses. The land was essential for farmers, which had to be protected against foragers leading to even more work. When you look at it from this point of view, we could say that, actually, humans were domesticated. Not the other way around. Basically, farming can feed more people under worse conditions. Yuval Noah Harari calls it in his book Sapiens as the biggest fraud in history.

Early with domestication, humans also got first pet: cat. Stack of wheat around human settlements lured mice, ideal pray for cats. Cats are very dominant and temperament, but this is not the case with other domesticated animals. Humans domesticated only animals which are calm, live in a herd (are loyal), herbivores (you don’t want to keep around animals which see you as a pray), and are available in the region. By the way, the result of domestication is a smaller brain; smaller brain means smaller panic button.

But why this happened ten kya and not sooner? Because the last ice age ended around 12 kya. The conditions for the Agriculture Revolution were not ideal before. The end of the last ice age is also the suggested epoch time for year count by Holocene calendar, and I will use it from now on. 0 HE is a significant milestone for humanity. It will give you a much better insight into how old human civilization was at a specific time. Current year of writing this post is 12020 HE.

Humans acquired genes for cultural life, which can adapt much faster than genes. Humans settled down, and that brought a different menu. Genes had to adapt to it. For example, you will not find any other animal to drink milk in adulthood. Other animals are not ready for it. Humans were not used to carbs either. But it was what was available for farmers. Of course, the change happened over many years, and to be honest, it’s still happening. I observed I feel better when I eat fewer carbs and dairy products. Some people are not that lucky and have full intolerance against carbs or dairy products.

It’s fascinating how cultural life can change the course of changes to our genes. Animals can adapt to many environments. Humans migrating to high altitudes in Tibet adapted to less oxygen, but they didn’t adjust to cold weather. Why? Because humans invented clothes faster. Our eyes could get more lazy thanks to glasses. Maybe even our brain will get lazy because we don’t have to remember anything any more thanks to devices in our pockets connected to the internet where all wisdom of humanity waits for us.

As we can see, cultural life can adapt very quickly. Before anyone could notice that the Agriculture Revolution made their life worse, there was no way back. Nobody remembered how they lived before! Even if they remembered the foraging era, they would need to cut numbers. There were between 5 and 8 millions of foragers around 0 HE, and up to 300 millions of farmers in 10000 HE (or two kya).

Farming got better over time. One important invention was the plow around 6000 HE (or 6 kya). Anyway, people lived a very poor life for more than 10 thousand years before a tractor (and other machines) were invented. Only today, we can say many people can finally live a peaceful life with more than enough available food.

The journey from first humans till this very day is long, and we are nowhere close to the end. We are at the beginning of civilization. I will continue in the next post. 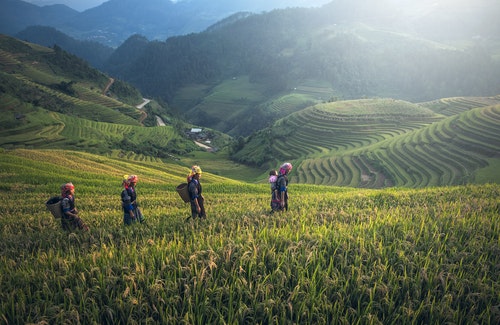