Greece was cradle of the modern world. Democracy was a big boom, people thrived, and civilization flourished. Neighboring kingdoms noticed it.

Macedonian king Philip II happened to be captured by Greeks in childhood and could see how great Greece was. Philip requested Aristotle to come to tutor his son Alexander. Alexander the Great learned a lot and used the knowledge to conquer and unite almost all cultures known to the western world. Greece, Egypt, Mesopotamia, and Persia to note a few. Alexander spread Greek culture everywhere, and many cities opened doors to the king of the world. Unfortunately, for his empire, he was too greedy, and his empire ended as quickly as it started. Empire fell apart to four pieces in 9698 HE (Human Era, 301 BCE), only a few decades after his death.

From the other side, Romulus and Remus founded the Roman Kingdom, just a few years after Greece. Romulus established the senate, which served as counsel for the king. It was a monarchy. The noblest men were selected, but the king could ignore them. Senate didn’t like it and transformed monarchy into a republic after Greece’s successful model.

Both republics lived peacefully next to each other, but once Greece was not in good shape after the Alexandrian Empire fall, Rome overtook it. Greek culture was adopted even more by the Roman Republic. Athens and Sparta were the only cities not assimilated by Romans. Both cities were deeply admired by the Romans and used as an attraction.

During Julius Caesar’s time, the republic was experiencing civil war and a financial crisis. There was only one known way to solve financial problems in the ancient world (well, we could say it was true till last century): find new regions, conquer them and use all valuable resources. The Roman Republic was already spread around the Mediterranean Sea, so Caesar needed to expand from shores to the inland. Romans had to confront Celts there. It was the end of the Celts. Romans destroyed anyone who stood in their way or was a threat to Roman culture.

Consuls had a hard time passing any law through the senate in the Roman Republic. Caesar didn’t like it and admired Alexander. He decided to turn the republic into an empire. To make it happen, first Caesar increased the number of members in the senate to appoint his own people who would vote for him. It worked, but he died the same day he named himself a dictator. Rome stayed empire, though. Augustus, the first Roman emperor, decreased the number of members of the senate back to limit the power of the senate and enlarged empire dramatically around the Mediterranean Sea, annexing today’s Egypt, Croatia, Slovenia, Austria, Hungary, Switzerland or Spain.

Once again, the original Greek culture was spread around the world. Notice there were no cars or trains yet, and the easiest way to move goods or people was still by sea. Rome’s expansion to inland forced Romans to build roads and connect Europe together. From here, we have a saying, “all roads lead to Rome.” Besides that, Romans invented concrete, social system, newspapers, books, and more.

The third century brought many problems again: plagues, civil wars, political instability (26 emperors in only 50 years!), inflation, and migration of tribes from north to find new homes. Crisis of the Third Century was another a big challenge for an emperor.

Emperor Constantine the Great changed this and tried to use monotheism to secure empire again. Any religion was allowed, and for the first time, Jews, Christians, or anyone with any faith could live happily next to each other. Christianity was the only religion supported by the government, though. Constantine founded Constantinople (Istanbul), and it was proposed as a new capital.

It worked out. Everywhere around was poverty, famine, plague, and warlike kings and emperors looking for soldiers. Church provided hope that life is not full of misery. Later, Theodosius I finished what Constantine started: Christianity was the only allowed religion, and soldiers were fighting under the Cross. From peaceful religion became a warlike religion.

Christians were not perfectly united. Roman Empire was divided between two Theodosius’ incapable sons. Each part was using a different language (Western Roman Empire using Latin and Byzantine Empire using Greek), making it hard to stay in sync as only a few people were speaking both languages. Both Christian branches (Catholic on West and Orthodox on East) took a slightly different path.

Roman Empire had to face one more challenge: migrating Germanic tribes from northern parts of Europe to southern parts occupied by Western Roman Empire. It was not the same story as with Celts. Empire did not outstand a large number of barbarians (how Romans called them). To be continued. 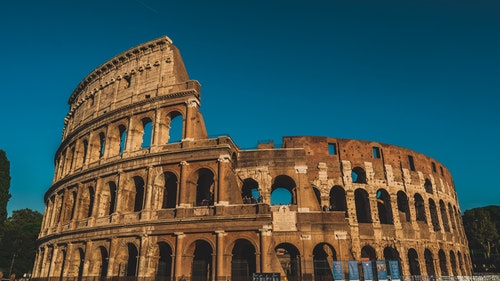