So far, we have seen how civilizations emerged in Mesopotamia and Egypt. Some kingdoms transformed into empires and some people left to live in diaspora in between to form believe in one God. But there were many more civilizations we know little about because they had no writing system or didn’t use it so extensively as others. Thus we have few sources to get valuable information from. Those civilizations were not less important for the direction of many events.

One of such civilizations was Minoan civilization. Minoans were probably the first society in Europe on the island Crete dated between 7300 and 8900 HE (Human Era, 2700 and 1100 BCE). They had big ships and traded with all civilizations around. We don’t know what caused the collapse (probably volcanic eruption), but we have sources about unknown people called Sea Peoples dated between 8800 and 9100 HE. Sea Peoples were attacking many places around the Mediterranean Sea, including Egypt or Levant. Some sources from the Levant are connecting Sea People to Crete.

Egypt suffered a lot from the mentioned attacks. Maybe Egypt would survive raids from the sea, but this was not the only factor. Another factor was climate change resulting in many dry seasons in a row. Not just Egypt, but many other regions had to deal with a food shortage. People starved, and it caused political imbalances (why would anyone care about administrative bureaucracy when people are without basic needs).

On top of that, climate change caused volcanic eruptions and other natural disasters. Ancient empires collapsed together with all their trade connections. Silk Road, a complex of trade routes, was forgotten. For example, almost all empires depended on tin from Mesopotamia or gold from Egypt. Once one empire collapsed, all of them collapsed.

It caused dark age for historians because people had no need to write. I would guess the majority lived with no serious change because they still had to take care of their fields and animals. Only people (negligible fraction of the total population) working in administrative had to adapt.

Europe had many more cultures we know only a little about. The first people came to Europe way before Minoans with the first migration wave from Africa, and many tribes were living all over Europe. All of them had no idea about empires forming around the Mediterranean Sea. This was about to change.

Some people left Mesopotamia and headed to find a new home. Celts filled southern parts of Europe. They spread from today’s Turkey to Britain between 9200 and 9600 HE (800 and 400 BCE). At about the same time, some people found home in today’s Greece.

Both Celts and Greeks tried to do things differently because empires didn’t work for them. Celts went back to smaller tribes, and Greeks made an empire for people, not for rulers. It was a republic based on democracy. Greeks were the first to come up with a republic, democracy, and all other names such as oligarchy or tyranny.

Democracy literally means “rule by the people.” Greeks taught people to live a political life and think about it. Not to be just manipulated by kings or emperors. I would say Greece was more confederation than republic. Each city was independent and unique, with its own political representatives voted by people of the city during regular gatherings in the meeting called agora. Agora attendance was mandatory, and people coming late or leaving soon were marked with a red color. People were even paid for the time spent in the agora.

Greeks built temples for people, not for kings. Of course, no king paid for it, and the state was financed by the wealthiest citizens who paid so-called liturgy (something like tax). It was not required, but they did their best anyway. From this money were invented and built more building for people to enjoy life: stadiums or amphitheaters used for various festivities, including ceremonies for gods.

Even though gods were still important for Greeks, and mythology was used on a daily basis, thinker Thales believed that real truth would be found by thinking and started a new discipline named by Pythagoras as philosophy. Philosophy literally means “love of wisdom.” Basically, there was no difference between philosophy and science. Sometimes, philosophers were heading to a dead end, but it brought on light equally important questions.

Philosophers changed the world a lot. Egyptians observed the world and found mathematical formulas, whereas Greeks found mathematical proofs based on calculations. Philosophers in Greek abstracted formulas from the real word, generalized them, and deductively found fundamental axioms and from them created more complex ones. The groundwork for all modern art of numbers (or arithmetic) and earth measurement (or geometry).

Probably I don’t have to mention many famous philosophers from that time such as Thales (already mentioned; father of philosophy), Pythagoras (who believed everything could be calculated), Socrates (well known for his critical thinking and paradoxes), Democritus (founder of atomism), Plato (follower of Socrates and founder of Academy), Aristotle (who extended philosophy to many fields; founder of Lyceum), Euclid (father of geometry) or Archimedes (who anticipated modern calculus).

Besides a long list of philosophers, Greeks can show off with Hippocrates (father of medicine; he was the first to realize that all illnesses are not gods punishment but an imbalance in the body, unfortunately, he was wrong what is essential, and people believed for a long time in bloodletting), Herodotus (father of history), Aesop (probably the father of fables), Aristophanes (father of comedy) and many, many more.

To make it short, Greece is the cradle of the modern world. Unfortunately, there were more people outside Greece than inside with old customs who will slow down the course of history. To be continued. 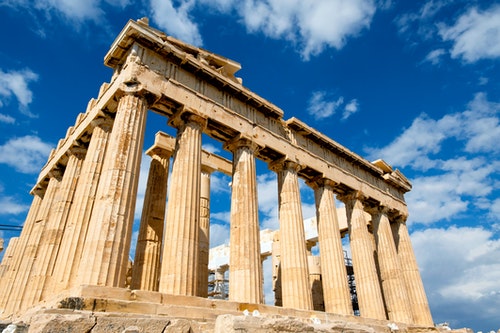