Cities cannot expand to infinity. A city will eventually hit borders of another town. In an ideal world, all cities would cooperate to build a better society. But we are only humans. Even if we have all a lot in common, we tend to see huge differences and prefer only individuals or groups which are as close as possible to us.

If you meet someone from the same group you are part of (a group can be anything; family, band, village, city, state, religion, club, …), you will have some expectations. For example, you will expect that person will be kind to you even if you will not know that person. But you will not have the same expectations from other groups you don’t know. I will warmly welcome anyone from salsa community but will not do the same for absolutely anyone.

That’s why people who just met and discovered they are from the same state, city, or school will talk like old friends. Experiments also prove it: Scientists dressed kids in T-shirts of different colors. As you can expect, kids with the same color played with each other more. In this light, it makes sense we care so much about borders. But still, there is a problem with edges. Borders are artificial. Most of the time, people in one country living close to a border are closer to a neighbor across the border than with the citizen of the same country from the other side of the country.

Anyway, as said in the post about learning, we tend to cooperate even with strangers, at least until we experience it’s not profitable. We need to know that a particular person before we can say it’s friend or foe. Sometimes, we can deduce it: a friend of a friend is our friend, an enemy of a friend is our enemy, friend of an enemy is our enemy and, lastly, an enemy of an enemy is our friend. Otherwise, we need to get in touch first.

Citizens of cities Lagash and Umma did not know each other, and their connection was neutral. This neutrality disappeared once they fought for one particular area. Conflict does not necessarily make enemies, but conflict with different views on the problem does—citizens of one city saw others as distinct and thus not a friend. The conflict was ongoing for many generations before Eannatum, king of Lagash, destroyed opponents.

It happened between 7500 and 7600 HE (Human Era, 2500 BCE). Eannatum created a monument celebrating his victory and telling various battles and religious stories. The monument is called the Stele of the Vultures. Other kings also adopted this practice and raised stones in their cities with information about the current ruler. It was crucial to destroy such a stone to conquer the city.

Conquering other cities is not enough to form an empire, though. To start something huge, food surplus is needed because not all people can work on the field. Some people have to manage society and improve it by inventing new tools. Humans had already surplus thanks to digging water channels to control flooding of the crops. The next step called for some new discovery.

Bronze, an alloy of copper and tin, was the jackpot. It was much more durable material that could be used for many tools, weapons, armor, or building materials. You could also melt it and create something else again. Everyone wanted it. The first evidence of an attempt to make bronze is dated back to 5000 HE, but it was not an alloy of copper and tin but arsenic, which was more available around Mesopotamia. Arsenic bronze is harder to make, the result is not that strong, and the process can be toxic. Once bronze was invented and widely used around 7000 HE, it kicked off the economy, more inventions, and empires.

Each empire followed more or less the same form. The ruler raised monuments to declare his empire. Besides monuments, rulers wanted to be close to gods. If gods were important for foragers and even more critical for farmers, we can say the same about rulers. Rulers made their subjects build temples to worship gods. Every ruler wanted to surpass the previous one and create a more splendid temple. There were many empires, and not every lasted long. Rulers knew it and tried to build something hard to destroy or at least hard to forget. We can admit it works. At least in Egypt, we admire massive tombs called pyramids even today (Egyptians cared about the afterlife a lot).

Empires needed more people, and land and food for those people, to build such remarkable constructions. A small area cannot fit many people and cannot produce enough food surplus. The expansion was a natural choice. Where? To places near the sea. The fastest option to move both people and goods was on the water. Also, copper and tin needed for bronze were not available everywhere. For example, a lot of copper was on Cyprus (and this is probably where the name of Cyprus comes from). Boats known already at the beginning of Holocene (0 HE or 12 kya) were not enough for a voyage on the sea; bigger ships were invented.

Empires also needed to establish laws (mythology was more about etiquette), which would be followed by all subjects. Hammurabi, king of the Babylonian Empire, created the first code—Code of Hammurabi—covering all necessary laws (taxes, marriages, slaves, …) in 8245 HE (1754 BCE). About 500 years later, we have proof of the first truce: Egyptian–Hittite peace treaty.

From Egypt, we have many more great inventions we use today: make-up, toothbrush, locks, mining gold, ships, complex writing system, papyrus, calendar, and so on. Egypt was a place of progress. They had papyrus thousands of years before China invented paper, and Egyptians did not use slaves as much as other empires.

There were many empires, but it was not the only way how to build a society. Bible unified people in the Kingdom of Israel. The next post will be about that. 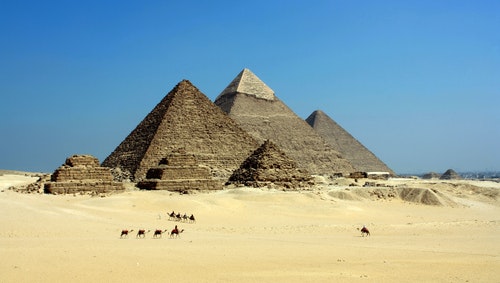