Every one of us believes in something. It’s natural for humans because it helps us to organize society. Humans tried to explain how the world works once they acquired cognitive abilities. Still, they had to wait for a long time before the real science (to have a writing system, collect a lot of observations and discover natural laws) could be done. Until recently, humans had only one option to explain things: form a belief and use supernatural explanation.

During the foragers’ era, faith was local. One band lived in a small area known for that specific band. The area where they moved was less than 1000 square kilometers. If the band used some supernatural explanation for a surrounding world, foragers in other places didn’t care, and no one tried to force any faith to others. They couldn’t.

An example of local belief (we could call it superstition) could be that killing a fox brings a destructive storm (based on past experiences). It’s not surprising because any animal will avoid contact with anything that has caused direct harm in the past. But no other animal than humans can think in a sophisticated abstract way. Humans invented the invisible hand, gods. The only possible explanation of how the world works was that someone is behind it all.

Mythology (and gods) was forming already around 35 kya (thousand years ago). Religious rituals united communities around the same values. Foragers made rituals to please gods together so they could have better luck the next day during hunting. Mythology was even more critical in bigger communities. Farmers needed gods to help much more. Farmers owned land and animals, but they couldn’t control everything; for example, weather, or the health of crops and animals. The only hope was to pray to the gods.

Once humans organized into bigger and bigger cities and they traded between each other and also between cities, they had to unite mythology so they could cooperate. Mythology became a religion, which provided laws, constitution, and etiquette. People needed to find a compatible faith for all.

Polytheism was kind of working. All ancient kingdoms and later empires had many gods, and even if names were different, gods were shared. For example, ancient Greece had Zeus, the king of all gods, while in ancient Rome, he was called Jupiter, or Odin in Norse mythology. Foragers prayed to several gods, then farmers added more of them, and then cities combined gods together, but each culture used their names. People chose correlation instead of fight. That makes sense.

But maintaining a list of all gods was hard. Using them to build nations was even harder. There were too many of them. The first attempt to use monotheism and build an empire around it was around 8699 HE (Human Era, 1300 BCE) in Egypt by Akhnaton. It worked only for a short time (if we can even say it worked).

Monotheism can work until it respects other gods. The first significant monotheistic religion was Judaism, which was meant only for people of Jerusalem. It was no threat to other faiths. Later, Christians came in, and they were not respectful to other religions. No one wanted them. They had to secretly meet in the underground until Constantine the Great wanted to try monotheistic religion to set order after a civil war in the ancient Roman Empire.

Today, we have to live with it. Monotheism has another drawback—there is no easy way to explain why unfortunate events happen. If good God loves us, why is he punishing us? Dualism can help here, and monotheistic religions are, in fact, borrowing opposite evil principle such as Satan or Devil. But dualism has problems to explain order. Why should we follow only one side, the “good” one?

Anyway, not only gods were invented. Religions based on God accept there is God and ask questions such as what does he want from me? In Asia, Buddha accepted that suffering exists, and asked question how do I escape it? But Buddhism doesn’t refuse the existence of gods. Actually, Buddhists believe there is a being in everyone that can be reborn to any life form. It can be a god, human, or animal. Animals are treated as inferior to humans, and humans are inferior to gods. Doing good increases your karma, which indicates in which form your being will reborn. Your task is to meditate and find nirvana to end this reincarnation cycle and be released from the cruel world.

Einstein said Buddhism is the best religion because there is no God, no dogma, and can cope with modern science. I have a very similar opinion. Unfortunately, most spread religions are based on God, and I will talk about it in more detail later.

Next time, I will continue with writing. A writing system is an essential tool. It’s the foundation of any empire, republic, or complex religion like mentioned Judaism. 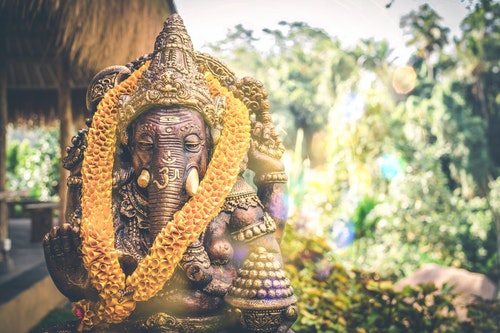