Spyro Reignited Trilogy is a new and old game at the same time.

I remember, as a kid, I was playing Spyro on PlayStation 1 (I think at that time there was no number) owned by my cousin. The PlayStation was connected to the TV at grandparents’ place. We liked to meet there and play several games which would be good nowadays as well. Because those games are pure gold and fun!

One of those games is Spyro. Small dragon fighting enemies. But don’t be confused. Real fighting is actually only in the last levels, which I’m unable to complete. I prefer to play all the other levels except for the last ones. Game is for kids—enemies in the first levels, enemies are more likely to run away from small dragons and are almost harmless. Later in the game, they got more durable, but still very easy to kill.

The primary purpose is to collect all the stuff. Diamonds, gems, eggs, dragons, whatever is needed to be allowed to be passed to the next level. My strategy for the first game was to collect the minimum required to finish the game. I found out the last fight is very hard and not fun at all. So then I went back to the first levels to enjoy a peaceful place and find all those stuff.

The second and third games, I played differently. I focused on finding all the stuff right away. I’m still far away from completing the third game, but it’s just fun. It’s perfect after a hard day to simply sit on a couch in front of the TV and play the sweet dull game. Which is not as dull as you think. Sometimes it’s actually tough to figure out how to get some gem!

I should now explain what means third game. The original Spyro was a trilogy that is now remastered and in one package for the latest consoles. As a kid, I played the last game from the series, Spyro: Year of the Dragon, and I had problems to recognize the same places. All those extra flowers or real grass! And butterflies and everything. Still the same game, but the feeling is so much different…

I spent a lot of hours playing Spyro lately. I cannot imagine a better game to shorten the time before the last season of Game of Thrones. Another old remastered trilogy is Crash Bandicoot, but I haven’t even started the second game yet. One was enough for now. Maybe with the upcoming release of remastered Crash Team Racing, I will spend more time with a bandicoot. :-)

I hope I will have kids soon. It will be easier to justify buying all those new remastered games! 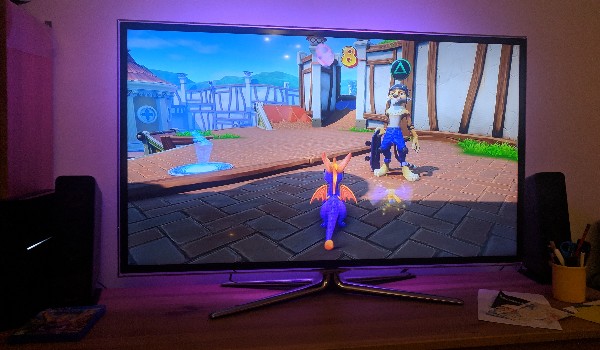