The network of trade routes connecting Europe and Asia was rebuilt during the Middle Ages, and people happily traded over Silk Road again as in ancient times. The end of the Middle Ages disconnects the two continents once again. This time not because of a natural disaster. European kingdoms transferred focus from Holy Land to their problems and let slip creation of a new empire in the East through their fingers. Conquering Constantinople in 11453 HE (Human Era, 1453 CE) by the Ottoman Empire is considered the end of the Middle Ages, the end of Byzantine Empire, and also the end of open trade routes to the east.

People wanted to trade because not everything can grow well in any environment. India was full of spices and silk. Black pepper was available only there. Also, Europeans were rich thanks to goods from India. People were afraid of the absence of trade and were trying to find the other way around to India.

Christopher Columbus believed Earth is not flat, and thus there should be a way to Asia from the other side by the sea. The Portuguese king rejected him, but the Spanish king supported him. Columbus found “India” forty years after the fall of Constantinople. It took few more years before Amerigo Vespucci “found” New World as well and named it after himself. Voyage to real India around Africa was realized five years later by Vasco da Gama.

But India was not that interesting anymore. Kings wanted to gain as much new land as possible. Spain and Portugal separated South America between each other with blank areas without the presence of other kings. That was not natural before. Usually, kingdoms only focused on neighbors, but European kingdoms got a fever to conquer as many new lands as possible. Columbus’ letter (about the new land) was translated and shared around Europe in a few weeks. It was a bestseller.

As shared in the post about civilizations, American civilization had not that many resources as European civilizations. The reunion of two continents was a clash of two different cultures. Unfortunately, American tribes were mostly only hunters who were unable to defend themselves against Europeans on horses with guns and deadly pathogens, which killed 50 to 95 percent of the indigenous population. There were up to 100 million people before Spaniards came to America, and after a few decades, there were only ruins of ancient civilizations.

New lands provided a lot of food and wood; both were very needed in Europe. American potatoes literally rescued Europe. Later sugar was as precious as gold. Everyone in Europe wanted potatoes, sugar, or tobacco. Colonists needed more workers. Because indigenous people died out and ships were coming empty on the way back to America, the solution was clear: pick up slaves in Africa.

Other kingdoms didn’t want to stay behind, but it was difficult for them for several reasons. First, not everyone was close to the ocean. Second, orientation on the open sea is hard. Latitude is easy, but you need time to determine longitude (note that the compass was invented already three centuries before discovering America). And third, scurvy. England was the first to master the time and the first to realize that citruses help not to lose a man to scurvy. England founded not just several colonies in North America but also landed in Australia or Hawaii, thanks to explorer James Cook. British Empire, with all colonies at its height, was the largest empire in history.

Each explorer wanted to explore the world, not to conquer it, though. But as I wrote in previous post, science was controlled by kings (which is true also today). Cook wouldn’t get an opportunity to have a ship with scientists and needed resources without also having navy on board. All empires did several wrong things, but good things would not happen without them.

A little bit late, France came to claim some land in America too. All colonies were regulated by the old continent, and, for example, there was a rule on how far colonists can go, and what belongs to Indians. The reason was to make the protection of the colony by army easier, and it was more effective to farm and mine only near the coast. Colonists soon realized there is no point in fighting each other and feeding mostly people in Europe. Thirteen British Colonies decided to unite and call for independence in 11776 HE. 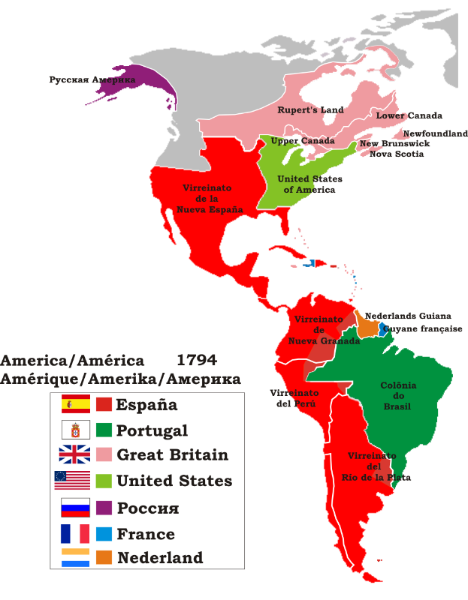 As in Greece or Iceland during Viking Age, also here people tried something new on new land. Democracy, freedom, equality. It started revolutions around the world, which I will cover in the next posts. Many people wanted to leave old lives under the old system towards new lives in a new system on new land. Once again, people started a migration; we would call them economic refugees today.

Maybe you will be surprised, but Napoleon shaped a lot how America looks like today. France was late and did envy that Spain, Portugal or England had colonies. Colonies made them strong and prosperous. Napoleon tried to invade Egypt, unsuccessfully. India was a passé. Strong Ottoman Empire in the east. So the only option for expansion was to restore French colonies in America. He needed three things: peace in Europe for free movement in the Atlantic Ocean, a key location in America where most goods go through to control everything, and a strong army and navy.

Napoleon managed to make peace with England and Austria and get a key location from Spain in exchange for Tuscany in Europe. That location was New Orleans in Louisiana—America had no routes yet, and the easiest way to move goods was on rivers. Many rivers ended in this city. He set out on his journey to America, but rebelled slaves in Haiti surprised him. Americans warned slaves he is on the move and that he will put them back to slavery. He lost.

The last option left was to conquer Europe. Napoleon sold Louisiana to Americans instead of back to Spaniards to make life worse to both Spain and England. That was very important for the United States and very important to make European nations unstable. The rest of the story is called Napoleonic Wars. Napoleon lead France from victory to victory. He conquered almost the entire Europe but lost once again.

The Napoleonic Wars was a major conflict and the biggest one up to this point. Europe was redistributed, which not everyone could swallow and live with it peacefully. Many countries had friction between each other and these frictions caused many more battles. Colonies didn’t care about problems of old continent, and one colony after another was declaring independence. No one wanted to be under empire’s control without a voice in parliament.

Next time, I will write about the Industrial Revolution, which accelerated everything.