I could never imagine I would say anything like this several years back: comic books are fantastic! I always took that comic books are for geeks or nerds for granted, and I’m neither of those. On top of that, I even don’t personally know anyone else reading comic books. Today, I still believe I’m not a geek or nerd, but I understand now that comics can be for anyone.

It all started with Marvel movies. If you already love comics and have your reasons, this might sound cheesy, but it’s true. I love those movies, actually the whole Marvel Cinematic Universe. The connection between all movies has amazed me since the beginning. I heard few times that it’s all wrong and whatever, well, sure, there is always room for improvement, but just show me who does it better?

Anyway, even with two movies a year, I wanted more. Therefore, I started thinking that I could read some comic books in the meantime. Similarly like some people started to read Game of Thrones books to kill some time before next season is on air. Universe (roommate) listened to my wishes, and I got my first comic book: Iron Man: Deadly Solutions.

It was OK, but not outstanding. Iron Man was one of my favorites characters, but I liked the one from movies, of course. The one in the comic book was just… different. Not what I expected. That was it for some time.

I then got a recommendation for Daredevil: The Man Without Fear by Brian Michael Bendis. The first omnibus was an absolute marvel. It’s not colorful and playful and furious as Iron Man I read or as movies. It’s a noir, slow, breathtaking story. If you saw Daredevil from Netflix, you kind of know what I’m talking about; that show is pretty accurate as far as the style is concerned. I learned that comic books don’t have to be just for kids.

Yet, at this point, I still didn’t consider comic books to be part of my reading list. For me, reading is primarily a tool to get information and new thoughts. I prefer movies and TV shows for anything else. But I do read even novels from time to time.

For example, many friends were (and still are) reading books written by Fredrik Backman. He is a good writer. Some books are pure fun, and I laughed a lot, like with A Man Called Ove. Or some are very emotional, and my wife cried a lot, like the Beartown trilogy. Of course, I was curious to read a book that can manipulate emotions so easily.

I was not too fond of it. I think that story is good, but there are too many characters for me. I have issues remembering names, so any such book is problematic for me. And Backman didn’t do it easier for me with changing scene from paragraph to paragraph without any heading when it got intense, where many storylines collide into one epic resolution.

That was when I realized how much I like movies and TV shows and how much I could like comic books. With pictures, I don’t need to remember names anymore. My new thought was: which comic book to read next?

It’s a bit hard. What I liked about Daredevil I read was that it has four omnibuses, and that’s it. No connection to anything else. I don’t want to read many books and follow all cross-overs to understand the story. That’s how I found Deadpool by Brian Posehn.

From many reviews, I read it’s perfect, but I was scared. Ryan Reynolds stole the character for him. Deadpool movies are hilarious, and I cannot imagine any other adaptation, similar to Iron Man’s case. Well, temptation won.

It’s childish humor. Blame me if you want, but it’s well done. It was nice to see not only silliness but also Deadpool’s tragic history. I was surprised how many other Marvel characters showed up; I’m not used to that from other comics I read. But I don’t mind it at all, quite contrary, because I don’t need to remember names (and scenes!). And, in the end, every character is explained anyway, so no need to find all cross-overs.

Deadpool experience is something that I expected from comic books. And I think it’s cool. Give it a try.

BTW, the next one on my queue is again one from Bendis: Secret War. 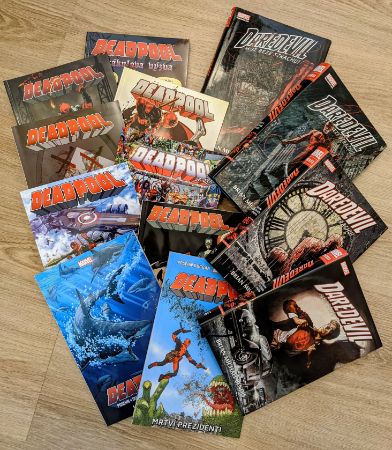