Europe before World War II was separated into two teams. One was Britain, France, the United States, and other liberal states taking care of their economic problems and ignoring the second team consisting of dictatorial countries Germany, Italy, the Soviet Union, and Japan.

The Soviet Union adopted communism, which was frightening because communism was strictly against religion, private ownership, or society. There was a strong reaction against it. The anti-communism movement was maybe even stronger than communism itself. Italy opted for fascism, which is about the nation. The state is the most important thing, which needs to be protected.

Germany used aspects of communism and fascism, but their goal was to make a pure nazi nation; racism was the central theme. Germany had problems with space; the population was too big for such a “small” area. There were many Jews who no one liked, anyway, so Germans blamed Jews for economic crisis (it was common that Jews worked in the financial sector). Germany wanted to solve this problem already during the first war but failed. Hitler had a new plan to fix the previous failure, all thanks to (again) new discoveries.

German chemist Fritz Haber invented fertilizers, which saved people from starvation. The same chemical method was used to make poison (gas used already during the first war) and this method was also the first step for nuclear weapons. Without this hope of new inventions, Germany would fall much faster if they even started a new war.

The next move was to pretend the same pattern of invasion through Belgium, like at the beginning of the First World War, and prepare a second unit for an attack from the other side. The chance for success was only around 10%. The terrain was hard to cross, and France would have to notice the attack, but it worked. The consequences were terrible. Germany conquered Belgium, whole France, and also Denmark and Norway.

After this move, Germany and Italy signed the Pact of Steel. Why steel? Steel was crucial for new wars. Everything was about steel. Even Stalin (Stalin is nickname, his original name was Ioseb Besarionis dzе Jugashvili) or Superman (with the first edition before the second war) means a man of steel.

Dictatorships managed the world. Britain didn’t know what to do. Winston Churchill was alerting about Hitler long before the conflict, but he was a bulldog. Not someone suitable for a liberal government. People ignored him. Now Britain had a serious job to do for which Churchill was ideal. He wanted to beat Hitler.

At this point, Hitler lost interest in Britain because he already had the European mainland under control, and many more Jews with no place to put them in. His focus changed to the Soviet Union instead. Stalin lived in expectation that Hitler would not attack Russia, yet. Hitler expanded his empire on Balkans and opened an attack. It was a gamble to win it earlier than the United States would step in.

From the other side of Russia, there was an important ally of Germany: Japan, which had a problem with the Soviet Union, China, and Australia, basically with anyone. The United States was aware of the situation and needed to come up with some plan, but their army was tiny, only 20th largest at that time. They planned to help out Russia by drawing Japanese attention to anything but Russia. The plan worked partially. Japanese attacked all countries except Russia, but also Pearl Harbor. The good point was that in Pearl Harbor were only old waned ships making no real damage to the United States navy.

The war was won by the allies again. The United States was able to decipher Japanese communication and knew all plans. Germany didn’t conquer Moscow in time before winter and was cut off supplies. Hitler was inspired by Alexander the Great but didn’t use his technique to conquer each country differently. Hitler could come to a conquered state as a liberator but instead he insisted on nazism and pure race. Also, Germany had too many fronts (Soviet Union, Mediterranean Sea, Atlantic, and sky over the European mainland), and it was hard to focus on all of them at once. The Soviet Union and the United States were much better organized. And the United States was the first to come up with nuclear weapons (German-born theoretical physicist living in United States Albert Einstein was a pacifist but claimed in time of a war United States needed to work on an atomic bomb to have it sooner than the enemy). All this helped allies to win the war.

Which ideologies stayed after the war? Extreme fascism and nazism were out for sure; the world could see only two winning ideologies: capitalism and communism. Both parties were concerned about the future in their countries. Stalin saw the future in communism, keeping all allies and expanding communism. American presidents Roosevelt and Truman were afraid of another economic depression, so they wanted to collaborate and support capitalism on a global level. Churchill saw there would be no consensus. Communism is against free trade. Britain and France were sensitive about Poland because they joined the war based on the invasion of Poland. Both sides had a right for Germany. And west wanted to decolonize the world instead of supporting any expansion.

Germany was divided into the west and east parts. The conflict between democracy with capitalism and communism was here to stay for the next round. I will continue about that in the next post. 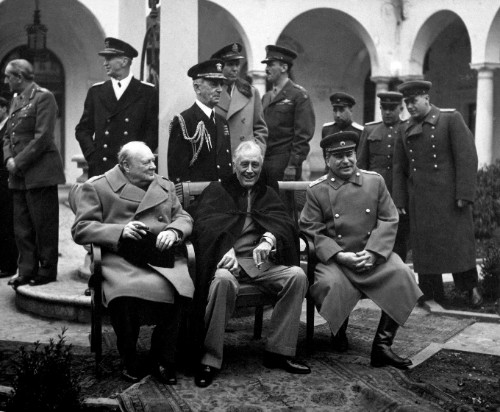