Humanity was left with only two ideologies after World War II. Democracy, going hand in hand with capitalism and other liberal ideologies on one side, and communism on the other. To be more precise, these two ideologies were used by developed countries as the only two working ideologies (only ideologies which won the war). But the choice was not that easy for the Third World (developing countries). Countries with active religion like Muslim countries had to use something else, such as anti-communism.

United States was not a leading power before World War II. Britain Empire was. But when Britain turned away from capitalism during the Great Depression, the United States has taken over the lead. United States founded many institutions like the US Department of Defense, USA Air Force, CIA, NSA, United Nations (UN), and so on. The United States was an example of a successful economic model, free trade, democracy, unions, and big corporations.

The United States also initiated a conference to create the Bretton Woods system as a replacement for Gold standard. Central banks agreed on the rules and limits of printing money, which made it as good as Gold standard. That needed cooperation in Europe, and the United States came with the Marshall Plan to enforce cooperation, democracy, and capitalism in Europe. The plan was simple: to give money to European countries under the condition to support free trade and capitalism, and to decide how they would split the money. Russia rejected the Marshall Plan and forbade participation of any satellite state of the Soviet Union.

The United States was sure about the recovery of democracy in Europe and was not afraid to pull off from Europe (and Asia). The nuclear weapon was their assurance. Two thousand tons of TNT can destroy a building. The first nuclear bomb used in Hiroshima during the World War II was five times stronger than that with a radius of 1,5 kilometers. Russia was just a few years behind, though. The United States detected nuclear traces from the Soviet Union, which started nuclear races. The United States created a thermonuclear bomb 100 times stronger than the nuclear one with a radius of 10 kilometers. Both powers had spies and always were only a few years behind the other. Everyone was talking about the Cold War in the middle of the last century, and kids were instructed on how to behave during a nuclear attack (see old TV spot Duck and Cover).

A lot of confederations (confederation is a union of independent free states with its customs and laws but which share the same goals), alliances, and pacts were formed in each power block to unite around the same interests with independence in mind. For the first time, Germany and France cooperated in European Coal and Steel Community and later European Economic Community, roots of the European Union. NATO was founded, a deal between Europe and North America for defense. Warsaw Pact was signed on the Soviet side between Russia and its satellite states. Inter-American Treaty of Reciprocal Assistance in America. Baghdad Pact in the Middle East. And so on. No one wanted to go back to extremes; many countries chose rather to unite on what they agree on instead of attacking each other.

Powers slowly decolonized the world, mostly Africa. Newly formed countries were significant for both blocks, but developing countries didn’t want to be part of any of the two powers. They didn’t want to get away from one empire and fall under another one. They needed to decide on which values to build their fragile country.

One option was communism (government controls everything) adopted, for example, by China. Another was democratic socialism (government controls a lot, but not everything) used in India or Mexico. The third option was import substitution industrialization (or ISI; local production is preferred with a barrier to the global world) picked up by Brazil. The fourth was export-oriented industrialization (or EOI; trade also behind a barrier but with poor local conditions and cheap exchange rate) with example in Japan or South Korea. The fifth option was liberalism (minimal control making rich even richer and poor with no support) with examples in the West. The last option was to do nothing (simply to find some resources, control it by force, and profit for ones own good as much as possible), mostly in the Third World.

Decolonization opened hard questions such as to whom Korea originally belongs? United Nations was responsible to solve the issue, but the Soviet Union occupied northern Korea and wanted to expand Russian ideology there. The United States left peninsula believing it would work out and did not even intervene in the ongoing Chinese Civil War. Stalin thought (based on the United States withdrawal from the area) the US is afraid and invaded South Korea with confidence. The United States was worried this would be another 1938 and tripled the budget for defense overnight. The border was kept in stalemate till Stalin’s death. Then truce (not peace) was signed with a demilitarized zone around the 38th Parallel (this zone does follow nothing but it was chosen as temporal solution), which is there till today (and people had to learn to live with it).

Another very complicated situation emerged in Vietnam. It was a French colony before the World War II, and the Vietnamese wanted to be independent. Frenchmen left, but during the war Japanese replaced them. Both Frenchmen and Japanese were not welcome. Americans, on the other hand, were welcome because they saved Europe. Because Americans were withdrawing army after the war, also here the Soviet Union started actions to expand communism in the North of Vietnam. France was afraid and came to protect Vietnamese, supported by the United States. Vietnamese didn’t like it, and Vietnam was temporarily separated into two parts, similarly like Korea. North powered by communism and South by France and the United States. The separation was planned only till elections when both sides would make a deal. It didn’t work out.

Vietnam War was long and unnecessary. Americans didn’t know what they were doing there, but they continued under the fear that communism would destroy fragile Vietnam. Northern armies were supported by the Soviet Union and China, and they were also using surrounding countries (Laos and Cambodia) for transfer. The terrain was tough, and it was hard to tell apart Vietnamese sides from each other. Also, the United States didn’t want to attack the North because they were afraid of China. In the end, they left Vietnam because of economic problems and public pressure. After this move, China was fearful of possibly being dominated by the Soviet Union and switched sides: China opened itself to the United States.

Cuba was supported financially and militarily by the Soviet Union, and the weapon was also for their protection, so they allowed this move even for a price to be the target. The United States knew about it in advance, but it was a hard decision: to do nothing meant to lose Berlin, to do anything in Cuba meant also to lost Berlin. The United States decided to make a blockade on the ocean with a threat of war. In the meantime, American aircraft spied over Cuba, and Cuban president Castro sent an Armageddon letter to the Soviet Union about an invasion. It was the most critical moment, but humanity was saved as the Soviet Union retreated.

Both powers were meeting regularly. Both sides exceeded the other in some areas. The Soviet Union had a bigger army. NATO had better technology and nuclear weapons. Soviets had more accurate rockets. NATO has superior submarines and bombers. And each side supported its interests in many conflicts. Besides Korea or Vietnam, also in Africa, Central America, or Afghanistan.

Let’s find how it ends in the next post. 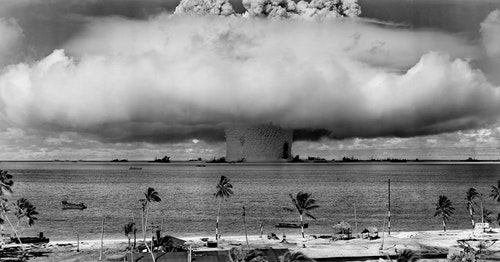