I dreamed about traveling quite a lot, but my family was not fortunate enough, so I had to wait. Back in 2012, I earned enough money to leave my country for the first time. It was a great experience that changed my life for sure. I think everyone should travel, mostly politicians, to find out friendly people are everywhere; some of the different shapes or colors or with different costumes, yet still kind. In other words, there is no need for war or whatever.

Anyway, my first two holidays were recorded on a simple phone camera. I don’t want to say I’m not glad about that, at least something. But it wasn’t the best output. It was 2012; no Pixels or iPhones with such excellent cameras around as today! On top of that, I discovered I enjoy taking pictures of nature, mostly details with all kinds of focal lengths—something impossible to do even with flagship mobile devices today.

Of course, it was time to buy the first DSLR camera. I ended up with Canon EOS 600D and some basic lenses. I slowly learned how to make good enough pictures with a manual to control accurately what I wanted to shoot. It served me well for many years until my first Pixel had a perfect camera. After upgrading to Pixel 4a, it’s even more impressive. Not mentioning GPS locations, automatic time, HDR, speed, weight, … basically, my question was: do I still need that heavy camera?

Well, it depends. When I want to do some macro, the not-phone camera wins. But for anything else, my Pixel 4a was more comfortable. Even during low light conditions! I knew for a long time I needed a better lens, and this was the final drop. Also, I am a salsa dancer, and I wanted to take pictures of dancers at a party I was organizing using fast shutters under poor light conditions.

The upgrade was spectacular. I bought two lenses, the first one Tamron 16-300mm f/3,5-6,3 Di II VC PZD Macro. You know, it’s zoom, so the parameters are not so great. If you are professional, sure, this is not a lens for you. I love this lens because I rarely need to change lenses on travels, and the minimum focusing distance is only 40 cm! Going down from above one meter is an excellent improvement for macro photography. Besides that, the previous one didn’t have stabilization, so anything with a slower shutter speed than 1/200 was unusable. Now I can go down to 1/80 and still have satisfactory results.

The second lens is Canon 50mm f/1.4 USM. I need to repeat it: 1.4! With this lens, I could do such beautiful pictures, except I couldn’t. Yes, it is a totally different story. Whenever there is not enough light, I switch to this lens and can happily continue as never before. Until I hit the limits of the old camera.

And that takes my story one year forward to this day. After a long waiting time, I finally upgraded to a full-frame camera. I’m a Canon guy. I don’t remember why I picked Canon back then. It just happened, and now I stick to it. I see it as a QWERTZ keyboard layout (Czech version of QUERTY). I got used to it, and there is no point in re-learn it. At least not now.

Minor spoiler: upgrade was seamless for me. Once you know how to control one Canon camera, it is super easy to grasp any other Canon camera. You will only spend most of the time exploring the new features or being amazed by enormous progress forward.

Reducing the choice to one brand kind of reduces the option to only one camera. I mean, I could buy the highest flagship camera, but I feel comfortable when I can be near the limits of the camera instead of my own limitations. :D Therefore, I picked Canon EOS 6D Mark II.

It is insane! In this light, my old camera is just a toy for kids. I was super curious about the possibilities with my 50mm lens with a full-frame sensor and high ISO. It had to be the first picture, and I couldn’t believe the results. Going above ISO 1600 on 600D was just a no-go; only if I truly had to take that picture and there was no other choice. But with 6D? ISO 10000 is still fine! Photos are 100 times better, if not more.

The problem is, I made a mistake. Tamron is for APS-C sensors only. I thought it wasn’t, but I compared so many lenses back then that I missed this detail. There is no issue with mounting it, but I cannot see the whole scene, and some people say it could even damage the camera.

That’s not the end of the world. I could find another lens for full-frame cameras. The catch is, such wide zoom is not available. OK, I could live with classical 70-300, but I got used to that short focusing distance. There is no other lens like that for full-frame sensors. I guess such a lens would limit the camera a lot, and thus there is no point in making one.

Therefore, I tried another camera: Canon EOS 90D. The price is the same these days. It is missing some features, such as GPS and automatic time (I forgot so many times to change time zone!), or full-frame sensor, obviously, but surprisingly 90D has many notable advantages.

After unpacking 6D, I noticed very quickly that focus points were too close to the center. I didn’t have the opportunity to try it in the wild, but it feels like a significant limitation—moreover, when we talk about such an expensive camera. 90D has more spread focusing points than on my old camera, which is great because I had issues with that.

Besides focusing points, it has an embedded flashlight. I don’t know how to use it properly, so I avoid it, but it is helpful from time to time. It is a bit lighter. Or it can do even more pictures per second.

Also, 90D has a newer processor, DIGIC 8, instead of DIGIC 7. I think this is a reason why the result is a bit worse, but only slightly. I tried to take a picture of my dancing wife in the evening without light, and yes, 6D produces cleaner images. I can see the light noise using 90D. But the result is more than good enough.

So the verdict is clear. I returned 6D with a tear in my eye. 90D covers all my needs, and my DSLR camera is finally again way way better than the camera I have in my pocket all the time. Let’s see for how long this time. The good thing is, I still have room for an upgrade. My wife might not like it because she is tired of my phrase I wish I had full-frame. Sorry, Lenka!

Let’s wrap it with some comparison. I took several pictures which I don’t want to share, but I took one quick picture of a bowl of walnuts with all three cameras before returning 6D. I cropped here to some small detail not in the focus, in decent light, using Canon 50mm f/1.4 USM. Aperture f/1.4, exposure 1/250, ISO1600. Everything was chosen to spot the level of light noise. Left to right: 600D, 90D, 6D. 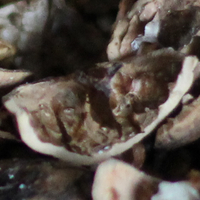 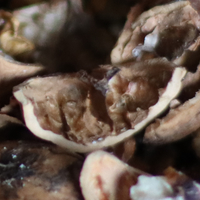 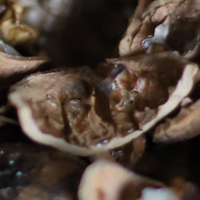